These dry crunchy biscuits are neither French nor Scottish but nevertheless very moreish and perfect for dipping in hot tea, fruit tea, coffee or hot choc.! Be warned – without dipping they are rock hard! They don’t go off, or soft, even after 4 weeks in the biscuit tin so a great secret to have ready for those unplanned « hi, I thought I’d just pop in » times! In December I also wrapped some to give away as pressies, so when I received an unexpected gift I could quickly whip out a bag of biscotti and voilà! 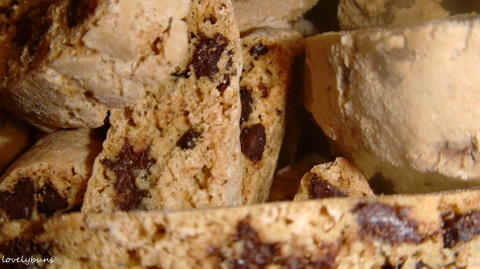 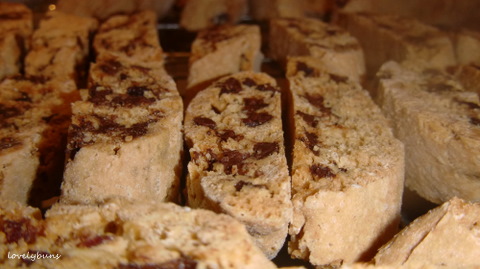 The following recipe is christmassy only because it contains mixed spice and dried fruit – smells like christmas! – but great to make at anytime of the year. I made half of my biscotti with dried fruit and nuts and the other half with chocolate chips and both are fab.

zest of an orange if you have one

Put flour, baking powder, mixed spice and sugar in a large bowl and mix together. Stir in the eggs and zest until it gets quick thick and sticky then finish off with your hands. Keep kneading until all the flour has been mixed in. Put half of the dough into another bowl. To 1 bowl add the chocolate chips and to the other add the fruit and nuts. Knead each ball until well-distributed. Split each ball into 2 and with floured hands roll each piece out into a baguette shape about 30 cm long. Place the 4 « baguettes » onto lined trays and bake at 160°C for 25 mins until crusty but still pale. When cool enough to handle, cut each « baguette » diagonally into slices about 1 cm thick. Place the slices on the baking tray and bake at 140°C for 15 mins. Turn the slices over and bake again for 15 mins until dry and golden. Tip onto a rack to cool and then put the kettle on! 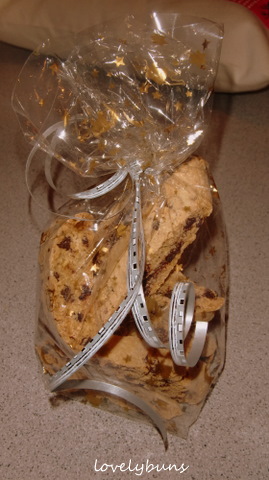 6 responses to “~biscotti – the perfect dipper~”

what do you think? Cancel reply